Neighbors and Other Strangers 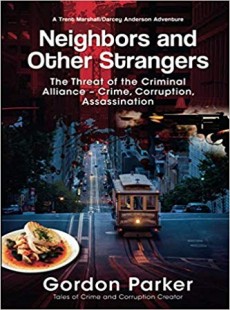 The Threat of the Criminal Alliance—Crime, Corruption, Assassination

Trent Marshall dropped from the overhanging limb of the oak tree onto the manicured grass of the fenced-in estate.  He moved silently through the dark toward the lights of the compound, the barrel of the powerful Desert Eagle steadily pointing the way.

He wouldn’t allow himself to think about Darcey Anderson and her executive assistant, Miles Diaz-Douglas.  This was the time to focus on the man who threatened their lives.  Trent intended to demonstrate it to be in that man’s best interest to assure Darcey and Miles’ safety.

Two hours later, Don Rossi stared in disbelief at the four security guards, lying wounded and bleeding around his pool.

“Let me get this straight.  One man did this to you?

And then disappeared, taking your weapons with him?”

Moments later, Rossi’s anger was diluted with fear as he read the note Marshall left for him.