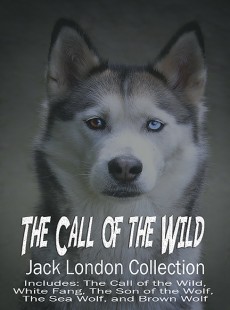 The Call of the Wild Jack London Collection includes: The Call of the Wild, White Fang, The Sea Wolf, Brown Wolf, and The Son of the Wolf. The Call of the Wild, a novel by Jack London published in 1903, is the story set in the Yukon during the 1890s Klondike Gold Rush—a period in which strong sled dogs were in high demand. White Fang is part dog and part wolf, and the lone survivor of his family. In his lonely world, he soon learns to follow the harsh law of the North--kill or be killed. The Son of the Wolf, tells of gambles won and lost, of endurance and sacrifice, and the relations between white adventurers and native tribes. The Sea Wolf, is a psychological adventure about a literary critic and other survivors of an ocean collision who come under the dominance of Wolf Larsen, the powerful and amoral sea captain who rescues them. Brown Wolf, another Jack London animal story about the north.