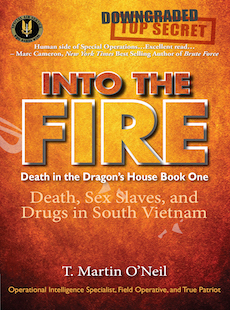 The cover of darkness was pulled back by the NODS scopes in their hands. The enemy had no idea what was about to befall them. With the rush of wings of dragons, the sounds of M-14s, M-870 shotguns, M-16's and grenades spoke the finality of death. This gave the human pack mules a taste of what would continue to reign upon them in the House of the Dragon. North and South Vietnam were at war. Indeed, all of Southeast Asia was at war. Due to national commitments, the U.S. military was drawn into the fray. Members of the elite Navy SEALS performed operations from counter-narcotics, counter-human trafficking and even counter piracy. These men placed their lives on the line daily as true humanitarians. Seen through the eyes of attached Naval Intelligence operatives, their stories can now be revealed. These operations, specific missions, even their love stories, are recounted in Into the Fire.