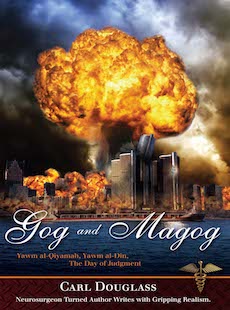 Gog and Magog, Yawm al-Qiyamah, Yawm al-Din, The Day of Judgment opens with a meeting of highly secretive Islamic jihadists who have a well-organized and ingenious plan to cripple the United States and Europe. The leader cautions his followers--true believers all--to be patient. On the other side of the world, a former federal prosecutor named Elizabeth Rowan is beginning the first of many steps in a meteoric rise up the federal ladder which will culminate in her being appointed president. First, however, highly placed people have to be proved to be corrupt, and some to die, to open her way. Her predecessor is an idealist whose life's ambition is to achieve world peace. He makes unprecedented compromises with Islam's rulers and its jihadists in order to achieve that goal. The leader of the jihadists recognizes an opportunity to lull the American president and his people into a stupor by offering them belief in an end to terrorism and the promise of real peace. While the West sleeps, the terrorists plan and put into place a nuclear holocaust to bring about a permanent crippling to America and Europe.