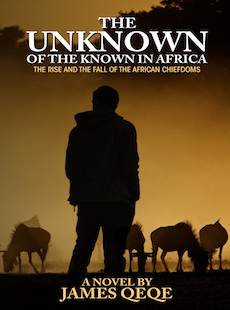 The Unknown of the Known in Africa is the story of George Eden Bess from Germany who does research as a historian. George unveils unknown King Shaka and his plan to make Southern Africa to be in his palm of hand. George's purpose becomes a plan to bring back Africans united, as there is no African foreigner in an African country. Africa belongs to all Africans and all Africans belong to all African countries. James' novel also shows that Africans should be against Xenophobia. The Unknown of the Known in Africa brings the genuine perspective and description of the Mfecane Wars also known as Difaqane which simply means the disruption during the period of late late 17th and early 18th centuryÑthe time of chiefdoms in Southern Africa. Africans might come from different tribes, but still Africans. We cannot change the past, but we can fix the present, and we can change the future. May God bless Africa.