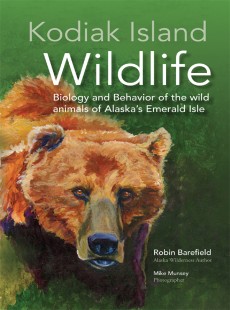 Kodiak Island, nicknamed the Emerald Isle, gleams like a gem in the North Pacific. Lush green mountains soar skyward from the ocean, framing deep, fjord-like bays. The island's wet maritime climate and mild temperatures encourage thick vegetation growth, which provides sustenance for the abundant wildlife on the island. The Alaska Current flows northward near Kodiak, bringing warm water and nutrients to Alaska's frigid Gulf. These nutrients form the basis for one of the richest marine ecosystems in the world. Kodiak bears reign as the island's monarchs, which has among the densest brown bear populations on earth. They are one of the six endemic mammals found on Kodiak, while humans have introduced many other wild mammals to the Kodiak Archipelago. The ocean surrounding Kodiak teems with seals, sea otters, sea lions, porpoises, and whales, while bald eagles, puffins, rare black oystercatchers, and arctic terns (which migrate all the way from Antarctica) also call the archipelago home. Learn more about this beautiful North Pacific gem and its amazing wildlife—and the challenges the animals face, both human and natural—in this richly detailed book by local naturalist, wildlife biologist, and sportfishing guide Robin Barefield, with photographs by her husband, Mike Munsey.