The Matter of the Dematerializing Armored Car 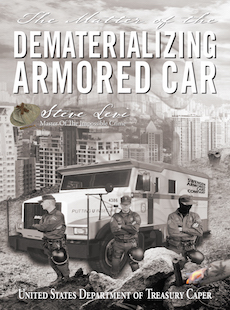 In The Matter of the Dematerializing Armored Car, Chief of Detectives Heinz Noonan is asked to solve the disappearance of an empty armored car and its two drivers from a tunnel with guards on both ends. Why would anyone want to steal an empty armored car and is it linked the $12 million in cash in the armored car vault under the control of the United States Department of Treasury which vanishes without a trace Ð legally?Ê A suspenseful thriller of breathtaking action where the detective must solve an impossible crime before the heist can become an unsolved crime!