Murder and Mystery in the Last Frontier 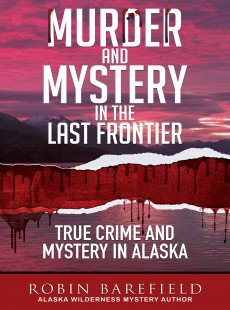 True Crime and Mystery in Alaska

Was the Mafia involved in the 1972 disappearance of the plane carrying Congressmen Hale Boggs and Nick Begich, or was it just a simple case of bad weather? Who murdered the postmistress in Ruby? How did the Alaska State Troopers use cutting-edge science to find Sophie Sergie's killer? How does crime differ from one part of Alaska to another? Alaska has always had a high rate of violent crime. From the gold rush to the building of the Trans-Alaska Pipeline to the heyday of king crab fishing, the state's rich resources have attracted eager workers and criminals alike. Travel through time and space with true-crime writer Robin Barefield as she tells you about murder and mystery in Alaska from the early 1900s to the present day and from Juneau to Kiana, Nome, Anchorage, Kodiak, and places in between. Learn about serial killers Ed Krause, Richard Bunday, Gary Zieger, Robert Hansen, and Israel Keyes. Why did Michael Silka suddenly start killing the residents of remote Manley Hot Springs, and what reason did Louis Hastings have for murdering his neighbors in McCarthy? Why was no one ever caught and convicted for the gruesome massacre on the fishing boat Investor? Alaska is vast and breathtaking, but it can also be deadly. Take a road trip and learn about Alaska's past and present through its violent crime. Get a glimpse of murder and mystery in the Last Frontier.