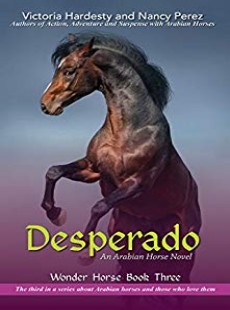 Desperado was something of a wild child. He explored the territory around his birthplace because there was no lock he couldn't pick. That early exploration would later save lives. Desperado had two loves in his life. One was his 80-year-old owner Hilda. The other was his 14-year-old rider, Todd. His biggest fear was Hilda's children would sell him to a man he despised after her death. Unfortunately an incident occurred that let Desperado prove beyond doubt what he felt in his heart. He ran into danger when all other creatures ran the other way. He ran through fire to protect the ones he loved. He hoped it would be enough to ensure his future with Todd on the land he called home.