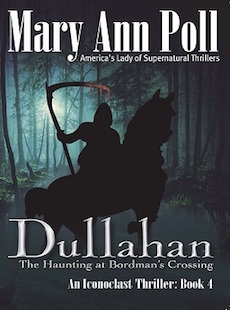 The Haunting at Bordman's Crossing

A sinister secret lies hidden in the swamps of East Texas. One which has been kept for centuries. A small town, a headless apparition, and a young man in a hospital hold the keys to unlocking the mystery. Four thousand miles away, Kat Tovslosky, Ken Melbourne and Bart Andersen prepare to leave Ravens Cove for a routine conference. What begins as a well-needed break becomes the fabric of most people's nightmares. For Kat, Ken and Bart, though, it's just another day in the life. Look out, East Texas, the Cove is coming to town. You might want to take cover. Because, you see, their all-too-familiar nemesis is waiting for them in the small town of Bordman's Crossing and will destroy anyone who gets in his way.