Walrus With A Gold Tooth 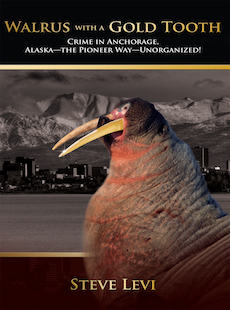 In the two decades between the Second World War and the Great Alaska Earthquake, Anchorage grew by a factor of 10. Money was, quite literally, washing down the street. The economic boom was so great that all you needed to make a million dollars was a cash register. At the same time Anchorage was one of the few cities in America where organized crime never got a firm foothold. Uptown, downtown, out of town, the locals were clever enough to keep the East Coast families out. Walrus With A Gold Tooth is a fictionalized version of crime in Anchorage over these two decades and a step-by-step history of how the local squeezed out the mob before it ever made it in. And if you know your Anchorage history, you just might be able to determine which characters are actual people whose names have been changed to protect the guilty.