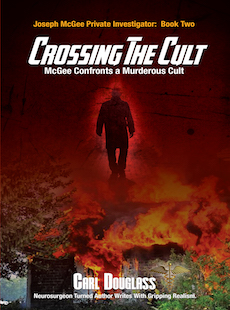 Crossing the Cult is the second book of Carl Douglass's McGee series. Devon Michael Carlisle joins The Only True Church of Christ with his family when he is fifteen-years-old and lives in the bizarre polygamous world of Heart of Eden, Wyoming. The young man is a true believer, and a very bright mathematician and accountant who handles the church's accounts in New York City. For the maturing young man who begins to see the world outside the cloisters of his tight-knit religious group, a little knowledge is a dangerous thing. Devon obtains a prodigious lot of knowledge, including such things as evidence that the patriarchs of the faith have been hiding the details of their transactions in the stock marketÑincluding green mail activity and inappropriate short sales--formation of dummy corporations, and accounts in the name of church members who have no idea what transactions are taking place. The revelation for Devon is that billions of dollars are amassing in the coffers of the elite elders of The Only True Church. The evidence and Devon's concerns deepen enough for him to seek the help of McGee and Associates. That leads to Devon becoming a whistleblower; McGee's partner, Caitlin becoming an illegal hacker and forensic accountant; and the FBI launching no-knock raids on businesses. Finally Devon and his sister Ruth become defectors. Life becomes reprisals, arson, murder, and vengeance. Around the brother and sister some get rich; some get poor; and some get dead. McGee is in the vortex of the action every minute.