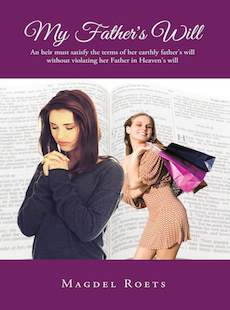 Stephan Howard Hammond knew he could count on his children to squander the fortune he would leave them in his will. His anguish over their future left him no choice but to find someone dependable to provide for them when the money ran out. This meant he had to reveal some deep hidden secrets, not knowing what the effect would be, unaware that Francine had already discovered part of the truth. Struggling through her own shock and disappointment she decided to keep quiet about what she had found until it was too late. With more secrets revealed, she must still go through with the plans her father's will provided for her; throw their inheritance to the wind. And withstand their unsympathetic treatment of her.¦¦How My Father's Will Came About: Enjoying a slice of cheese cake and an espresso in a coffee shop one day, Magdel overheard two men behind her boasting about all the things they planned to do with the money they were about to inherit from their late father's estate. One wanted a speedboat; the other wanted to get his private pilot's license. Oh, how the girls would love them. Right at this point the idea for a story was born in her mind. She took out her notebook and started making notes to research boats and airplanes, and a number of other things, like private companies and estates. She decided there had to be five children to share an inheritance. Being some sort of artist herself, she chose the main character, Francine, to be an artist, but a much more professional one than Magdel. From there she worked out the plot and built the characters.