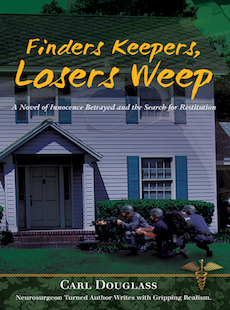 A Novel of Innocence Betrayed and the Search for Restitution

Finders Keepers, Losers Weep: A Novel of Innocence Betrayed and the Search for Restitution is loosely based on an actual event reported in the St. Louis Post- Dispatch, by Michael D. Sorkin entitled, Federal Agents Raid St. Charles Home by Mistake. Informer Told ATF that the house was center of illegal guns ring. Randolph Kennedy, his wife, Irene, and their little daughter Annie are ready to sit down for supper. Randolph is cleaning his handgun and is about to put it away. A massive crash announces a no-knock raid by a powerful force of ATV agents. Randolph wheels and fires at the first man in black he sees, killing the agent instantly. Before the melee is over, four agents, Irene, and Annie Kennedy are dead; and two agents and Randolph are wounded; their house is a total wreck; and Randolph is roughly hauled off to jail. This sets off a series of actions and reactions which eventually brings down the President of the United States.