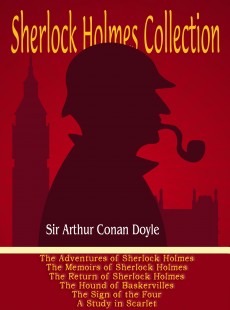 Victorian London is the setting for fiction's greatest detective team; Sherlock Holmes and his devoted assistant, Dr. Watson. In the Adventures of Sherlock Holmes they investigate a dozen of their best-known cases. Originally published in 1892, this is the first and best collection of stories about the legendary detective. It's also probably the least expensive edition available.

Featured tales include several of the author's personal favorites: A Scandal in Bohemia, in which a king is blackmailed by a former lover and Holmes matches wits with the only woman to attract his open admiration; plus, The Speckled Band, The Red-Headed League, and The Five Orange Pips. Additional mysteries include The Blue Carbuncle, The Engineer's Thumb, The Beryl Coronet, The Copper Beeches, and four others.

The Memoirs of Sherlock Holmes includes: Silver Blaze, The Yellow Face, The Stock-Broker's Clerk, The Gloria Scott. The Musgrave Ritual, The Reigate Puzzle, The Resident Patient. The Crooked Man, The Greek Interpreter, The Naval Treaty, and The Final Problem.

From the Return of Sherlock Holmes, "Holmes!" I cried. "Is it really you? Can it indeed be that you are alive? Is it possible that you succeeded in climbing out of that awful abyss?"

The one and only Sherlock Holmes is sensationally back from the dead, and devoting his life once more to examining the criminal complexities of the capital. Cases of mysterious codes, persecuted millionaires, stalkers, abductions and a meeting with 'the worst man in London' are all attacked with renewed vigor. But Holmes' old enemies are watching his every move. Watching, waiting, plotting...