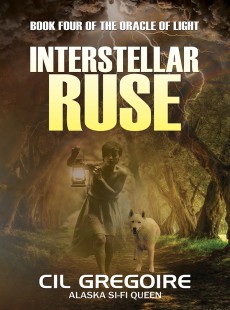 Book Four of the Oracle of Light

In this fourth and final book of the Oracle of Light series, Rahlys is lured into complacency by a visual misconception and her inability to detect the threat that lingers. Seeking a return to her true identity Melinda holds the key, and to protect those she loves shoulders the burden of confronting Droclum's evil essence alone. Only five year old Leaf Bradley perceives something is amiss. The lure of the key has far-reaching consequences stretching as far as the Devastated Continent. It may be up to Warrior Leaf to save the day. On Aaia it is a battle for individual dignity and personal freedom. With Captain Setas on their side, \“Seek Heart, Not Soul,” Rojaire and his followers, including Theon's daughter Ilene, seek to escape the High Council's control. But the reawakening of Droclum's essence plagues their attempt to reunite with Theon and the others in their secret valley. Terrifying events unfold on both worlds, with challenges that will test strength and courage and melt the heart with love.