DB Cooper Where Are You 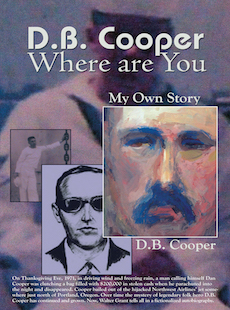 My Own Story. A Fictionalized Autobiography

D.B. Cooper is wild and conservative, smart and stupid, careful and courageous. He has imagination, determination, and an adjustable conscience. You've got to like him and despise him. He is a pirate, a friend, a schemer, a drug dealer, a nurturer, a murderer, a family man. And now--a writer? It's an intriguing tale. But D.B. Cooper is not a story character, he is real. He planned and schemed and prepared to hijack a plane, then did it and got away with it. Look it up--it was in all the papers, on television, in conversations around the country, around the world. People will say D.B. Cooper, Where are You is fiction, it is some writer's fanciful account of what may have happened Could be. You know what they say about becoming a writer. Write about what you know. Seems like Walter Grant knows way too much about skyjacking and growing pot. Sort of like D.B. Cooper.