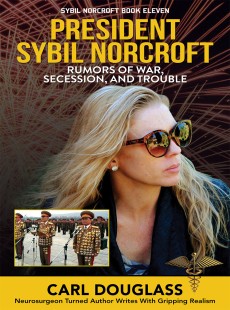 Rumors of War, Secession, and Trouble

President Sybil Norton Daniels's presidency is tumultuous, to put it mildly. In this, the eleventh book of the series, there are rumors of was and some serious skirmishes, a legal battle over secession moving seriously through the courts, and beaucoup troubles for the harried president--the first woman to hold the office. There is a scandal popularly known as the 'New Teapot Dome Scandal,' 'a National Enquirer contrived and photoshopped lurid expose,' a hate crime by New Confederate secessionists that incites riot, and