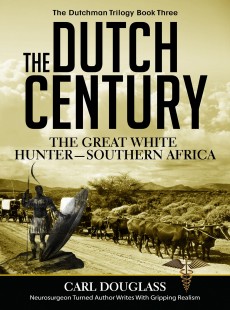 The Great White Hunter—Southern Africa is the third and final book of the Dutch Century Trilogy. It covers the last two-thirds of the 1600s, during which the Dutch exercised considerable control of all sub-Saharan Africa. Among the Dutch who spent significant portions of their lives in the region were farmers, traders, builders, mariners, and slavers. And, most interesting, some intrepid long-distance hunters. They sought fortunes as rewards for museum-quality mounted specimens, success beyond their wildest imaginations from the elephant tusk/ivory trade, and adventure—always adventure. They were brave and hardy souls who faced hardships of miserable travel in oxwaggons, difficult to manage native helpers, balky oxen, mules, and horses. In addition, there were problems of tribalism, close calls from fearsome beasts, including lions, leopards, elephants, rhinos, crocs, and dangerous men. Piet van Brakel explored the lower half of the African continent while still a fugitive from the dangerous Dutch VOC. To succeed, he had to control the vicissitudes of weather—floods, droughts, winds, starvation, and great thirsts. He was the baas, the bwana who had to deal with all unseen and unknown surprises. That included: animal attacks, Arab slaver/killer invasion, war with ruthless Zulu impis, poisons, malfunctioning guns, and misbehaving men of his safari team. He lost six of his nine lives, accumulated hard-won treasure twice, and gained incomparable friends and success beyond measure. Such a life was never a sure thing for the man. How he accomplished, that is the stuff of legend.