Sheep Dog and the Wolf 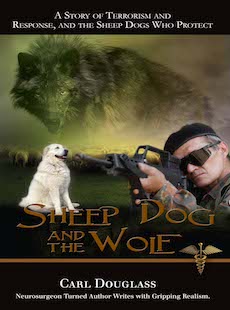 A Story of Terrorism and Response, and the Sheep Dogs Who Protect

Sheep Dog and the Wolf: A Story of Terrorism and Response, and the Sheep Dogs Who Protect, tells about Hunter Caulfield--a man who had long since shaken off his extraordinary past—Hunter had been in the nefarious CIA Phoenix program during the 'police action' in Vietnam, and had learned a dangerous skill set. His old buddy, now the assistant DCIA, recruits him to be a Sheep Dog—a man who protects the rest of us, the sheep. The U.S. tries diplomacy, bellicosity, threats, embargoes, and a police approach to terrorist devils-incarnate, but none of them works. The president cannot reasonably launch another Iraq or Afghanistan without more harm coming to America. The American public is growing ever more restive. Senior diplomats, military officers, and the administration need a new approach, a new weapon. Sheep Dog is that weapon—an assassin who is a nearly perfectly crafted hunter and killer; a man who can work alone, and who can be disavowed and denied in a moment by a whim of the president.