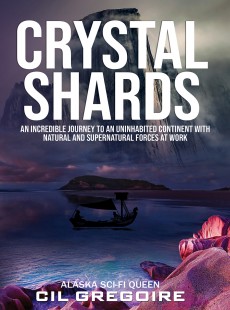 Fifteen Earth-years ago, outcasts from three worlds joined together to colonize the uninhabited island continent Lynnara on planet Aaia. Motivations varied; Earthen Ilene searched for her aging father, who had not returned. Thayla, a Twakan princess, sought adventure and freedom from the Twakan royal family, and Aaians led by Rojaire sought freedom from absolute government control. Now the Twakan throne, represented by Princess Xanthe and Prince Lozar, demands the return of Princess Thayla, taking Mentor Kaydra into custody until their demands are met. No one has heard from the colonists since they fled Mainland. And the portal to nearby Alaia Island no longer functions after a massive seismic event. Therefore, two ships are commissioned by the High Council to cross the Golden Sea in search of the colonists. What ensues is a stunning journey into the unknown, a life-altering journey for some, redefining the meaning of freedom for them. Filled with challenges and intrigue, Crystal Shards is brushed in vivid imagination with unforgettable characters, transporting the reader to another world.